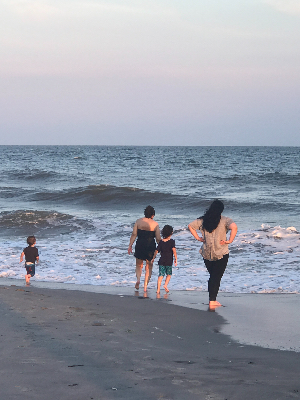 My mom at her favorite place with all of her grandchildren. Her last trip to the beach.

Thank you for taking steps against breast cancer. All proceeds from the Walk for Life and Famously Hot Pink Half Marathon, 5K & 10K will benefit Prisma Health Breast Center in the Midlands. Your contribution is greatly appreciated.

My Story
For most of my mom's life she has battled one form of cancer or another. At 20, she was diagnosed with ovarian cancer. They treated it with a hysterectomy and radiation. Unable to now have children of her own, I was adopted a few years later. When I was 7, my mom was diagnosed with kidney cancer. I remember so vividly being woken up in the middle of the night by my dad saying we had to rush my mom to the hospital because she was in so much pain. I remember so vividly walking next to my mom's hospital bed as she was being wheeled down the hospital corridor to be taken into surgery to remove the cancer. She beat it again this time, after radiation and the removal of 1 ? kidneys. She only had 20% usage of the small part of the kidney she had left. This time in my life scared me so bad that the fear followed me into my teen years. In high school, I would go into her room at night to make sure she was ok.
Seven years ago, I received a call from my mom that her kidney was failing and she was being put on the organ donor list. After several people were tested, it was a co-worker that happened to be the match. Before she was able to have the surgery, she was rocked with the news that she had stage 4 lung cancer. As she always had done before, she went to war with her body. Again, she beat the odds.
Three years ago, my mom reconnected with a high school boyfriend who became the love of her life. They were married and she moved to Missouri to be with him. Just as she was starting her new life, the lung cancer came back. Christmas 2018, my children and I went to Missouri to visit her. It had been just two months since her diagnosis. She was smaller and frailer than I had ever seen. She always tried to shield me from how serious things were and how she was feeling. I should have known better when she finally gave me the chocolate chip pie recipe that she would make for me every Christmas. I should have known when she told me she didn't want a funeral but instead a party on the beach with beach music. I should have known when she asked if something happened to her if I would take care of her cat. It didn't dawn on me that she might not beat it this time.
A month after our visit, my mom had her first chemo treatment. A week later I received the call. My mom had died during the night. Even a year and a half later it still feels surreal that my best friend, my hero, my mom isn't with me. That my kids will grow up not fully realizing how amazing of a grandmother she was. It's a pain I wouldn't wish on anyone. On the first anniversary of her death, her family and friends came together in a house on a beach and had that party and listened to that beach music. It was a day filled with love and laughter and tears.
All my life it was just my mom and me. To say we were close doesn't quite do our relationship justice. In a way I am thankful for cancer as it brought my mom and me together. Without her cancer she wouldn't have needed to adopt a child. On the other hand, I hate cancer to my core. Watching my mom emotionally and physically battle with cancers her whole life was the hardest thing I have ever done. I am walking for life in her honor and to help raise money so that another daughter doesn't have to go through this with their parent. To help relieve the stresses and burdens that come with fighting for your life. If you could donate, no matter the amount, I would be eternally grateful. My love and prayers go out to all people affected by cancer. It's an evil, evil disease but maybe doing this, working together, we can prevent breast cancer or any other form of cancer in generations to follow.

If you think this page contains objectionable content, please inform the system administrator.

Your login information was incorrect. Please try again or click here to have your information emailed to you.